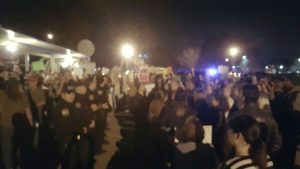 There was a 2nd District Town Hall tonight at Kempsville High in Virginia Beach, but one could have mistaken it for a Trump Wine tasting as attendees became intoxicated with POTUS issues. In fact, only two of the questions asked of Mr. Taylor had much if anything to do with our slice of Virginia, but hey: it sure was fun watching partisans lose their minds! 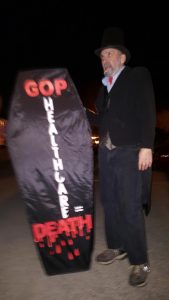 Outside was the real party, as Trump protesters didn’t disappoint in delivering irreverent, infantile cries of tiresome rhetoric.

You can probably guess them all: “Love Trump’s Hate”, “We are all immigrants”, and yes “Trump the Chump”. On the Republican side, there was some ridiculous chest thumping as well. One man apparently too many espresso shots deep into a caffeine binge ran out dancing and spinning toward the protesters in his Trump hat like he was at a Pantera concert; he didn’t hit or grab anyone but it was obviously provocative and the police had to peel a few ‘pussy hat’ warriors off him. Not to be outdone by dickishness, a liberal got up ‘in the grill’ of several peaceful Trump supporters claiming we “Christians kill more people than any religion” and that we were “Anti-American” for not allowing unfettered immigration from countries that hate us.

Other than that, dare I say this was..fun? The outside, that was. It was democracy in action, despite the fact that half the Trump protesters were A) from outside the 2nd district and B) probably bad with directions, because Trump wasn’t speaking at the event. Anyways, the most telling part of the confrontation and it was about a 60/40 split, was wich side the entire police line was facing. 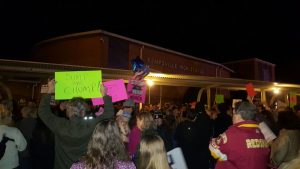 On the inside, where the actual town hall was taking place, there was lots of shouting, baiting and even reports of spitting. Most of the questions were asked by people who were clearly hostile and uninterested in what Congressman Taylor had to say. “How do we get avocados if Trump builds the wall?” was actually a question asked. Another about sea level rise was met with a lot of heckling before Scott could give a boilerplate answer about working together.

All in all, I feel the protesters would have appreciated our congressman had they given him the chance. He said he favors decriminalization of marijuana, wants to maintain Federal funding for battered women and disability and wants to keep the preexisting condition clause of the ACA. Yet as there were cameras from CNN and local news present, never miss an opportunity to spread your message I suppose ..even at the expense of residents who actually live in the district.