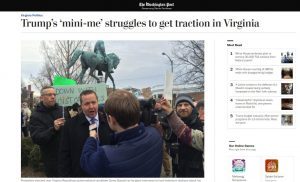 On St. Patrick’s Day, the Washington Post published an article by Paul Schwartzman calling one of the candidates for Governor of Virginia “Trump’s Mini-me” in the headline. Normally, this kind of title for an article would immediately expose it as what now is popularly called “fake news”.
Instead, many Establishment Republicans, confused conservatives, and Ed Gillespie campaign staff and supporters are circulating it as if it were a legitimate news story.

Reading into the article one will find “horrible” and “damning” information about the candidate the article ID’s as “Trump’s Mini-me”, Corey Stewart, such as:
-Stewart believes we shouldn’t tear down Virginia war memorials like the General Lee statue in Charlottesville
-Stewart believes public school buildings shouldn’t be named for segregationists
-Stewart’s campaign raffled an AR-15 style rifle as a campaign fundraiser
-As a Supervisor in Prince William County, Stewart worked to have Illegal Aliens arrested for committing crimes taken into Federal Custody and removed from his county 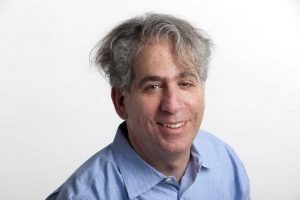 The Washington Post’s Paul Schwartzman actually appears to be attempting to cast these issues as negative and unfavorable for a Republican candidate. Can Schwartzman really be that ignorant? Perhaps he’s not ignorant, but instead is a willing accomplice to the campaign of Ed Gillespie who is a candidate for governor who holds views closer to his own liberal progressive statist beliefs?

In fact, the last time the Virginia Tea Party Patriots Federation held a vote of that nature concerning an election where Stewart was a candidate was in 2013 and they voted for…
Corey Stewart.

No, Ed Gillespie is not “the” tea party candidate. Is isn’t even “a” tea party candidate.
Gillespie is a typical DC establishment RINO Republican who talks about conservatism and the Constitution but clearly doesn’t understand it. In fact, his behavior and his writings in his own book prove he doesn’t even believe in it.
You can find information on what Ed Gillespie is really about in this News Guardians article.
For the purpose of honest disclosure, the Roanoke Tea Party is not a member of the Virginia Tea Party Patriots Federation and neither are most groups across the state.

The Roanoke Tea Party was ejected from the federation in a retaliatory action carried out against the federation’s rules by then chairman Jamie Radtke. You may remember her as the reported “tea party candidate” in the 2012 US Senate race. Members of our leadership, among them Chip Tarbutton and Greg Aldridge, discovered that Jamie’s “occupation” of the federation’s chairmanship was part of a scheme she was carrying out to use the tea party movement as support to win the Republican nomination for US Senate in 2012. When that was exposed by our group, Radtke took action and removed us.
When Radtke announced her intention to run for US Senate, the allegations turned to fact and many federation groups apologized to the Roanoke Tea Party for their participation in the illegal removal action. The federation invited the Roanoke Tea party to return in 2013 but refused our single request of an apology for what was done to us so we remain unaffiliated. Radtke went on to lose the 2012 primary to George Allen and the Roanoke Tea Party went on to helping E.W. Jackson win the republican nomination for Lt. Governor in 2013 against the official federation candidate…
Corey Stewart.

So here we are in 2017 and not much has changed. Politics is still largely fueled by lies, “the tea party” is still being used by people with ulterior motives to gain political power, and the Roanoke Tea Party is still standing up for the truth no matter what it is.
And the truth is, Ed Gillespie, is not the “tea party candidate”