The Beach Extends Our Apology 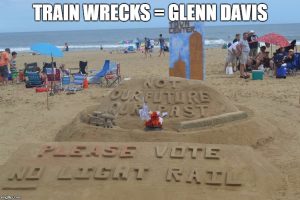 The result of voters thinking they have elected an R but got a D?

What is Glenn Davis?

This is the failure of conservatives in Virginia Beach. We have failed to inform voters of what Glenn Davis really is, a Democrat. We’re overrun on the city council with the Glenn Davis types but I digress. We cannot claim exclusivity on this fault nor are we the first, other areas are just as bad. But we are directly responsible for providing you (the state) with such a pathetic excuse of a Republican as Glenn Davis. His actions and voting record is anything but Republican.

The average voter considers the R beside a candidate to infer they are conservative. That they believe in the party plan and its platform. That the party creed actually meant something to them and was in fact considered our creed not just a guideline but our creed. That this every candidate would protect our constitutional rights. That they will reduce the size of government and the tax burdens on its citizens.

Oh no, not Glenn Davis.

We see it all the time the notorious perpetrator of a fraud. In a heavy Republican city as Virginia Beach, we find ourselves trying to explain that democrats will run as republicans (little d & r intended). Equally guilty are Republicans running as Democrats in a heavy Democrat city. An example of this would be the Honorable Delegate Johnny Joannou from Portsmouth, may God rest his soul. He was the last of the Blue Dog Democrats in Virginia. Johnny is sorely missed.

Well, that’s what we have rampant on the city council in Virginia Beach and that’s just where Glenn Davis came from. The man hasn’t met a tax hike he didn’t like nor could he control himself from doing every bit of Mayor Will Sessoms bidding. Yes, that Will Sessoms. The one that betrays our party at every turn. The one that endorses democrats or squishy republicans that will carry out his transportation boondoggle whims that feed the special interest developer’s with our tax dollars. Yep, that’s the one. The very Will Sessoms that has been convicted of a misdemeanor (correction, not felony). Every chance Will Sessoms & co. get, to include Glenn Davis, they did just that, raised our taxes. Let alone all the crony capitalism with PPP, (Private Public Partnership).

They try and sell the idea that millennials won’t come to The Beach to live. Guess what they still won’t, they can’t afford to.

Glenn Davis is all of this on steroids. Look at Glenn’s VPAP.org. You will find all the same special interest donors on Will Sessoms VPAP. They’re all there, Bruce Thompson, Jimmy Rogers, Gold Key Resorts, Ed Ruffin, they’re there. Some of them you have to look into the hidden company’s they own. Newtown Building Supplies is the perfect façade for buying a candidate. WARNING REVIEWING THIS MAY MAKE YOU SICK. The republicans that carry the load are listed. Remember all bad legislation is paid for.

Ok, ok maybe you’re the type that campaign contributions don’t matter. What’s the sweat and hard-earned tax dollars being recycled to wash the hands of another amongst friends? After all, it’s happening in Virginia Beach. You may not live here so what do you care?

How about the constitutional amendment of 2012? This amendment actually passed. It protects property owners from egregious government abusing eminent domain. Glenn Davis worked with councilwoman Rosemary Wilson to thwart that amendment. They wrote their own draft of the eminent domain amendment and sent it to Mark Obenshain for his approval. Fortunately, those slight changes were caught and the original was excepted. As Glenn and Rosemary were well aware of the fact of any changes would cancel out the entire amendment completely.

Ok, maybe you weren’t really paying attention then and didn’t know Glenn Davis was so dubious.

How about that $300 million train to nowhere, light rail? $150 million of statewide funds would be used to build this train wreck. That’s your tax dollars for a choo choo you’ll never ride. Lord knows if you had any conversation with me you knew about that. Glenn Davis strikes again. He along with his partner in crime, Rosemary Wilson are our two squishy republicans that wrote the 2012 referendum that gave us light rail.

Let’s play some footage that will tell the story better than I can write. Take the time to watch. It’s an education better than a college degree.

Ok, maybe you like to watch train wrecks? It’s not your city and as long as you don’t actually see your money go up in flames you can look the other way.

How about his legislation while in the General Assembly? Of course, all us Republicans like Medicaid Expansion, right? Well here’s your treat but all you’ll get from Davis is a trick, HB5008. Delegate Davis was the chief co-patron to that bill that would only give us Medicaid Expansion. And Glenn Davis tells everyone across this state he voted against Medicaid Expansion. If his mouth is moving….. If that weren’t enough look at his other notable liberal views and tell me he’s a Republican. Glenn Davis doubles down to try and justify his alt-left voting record and contradicts Americans for Tax Reform.

Oh, the agony of it all. Ladies and gentlemen, Atlas has Shrugged in Virginia Beach and Glenn Davis is the culprit. Don’t let this disease of squishy republicans from The Beach spread across our state.

The result of republicans acting and voting like Republicans.

What is a restored Republic?

It has come to our attention that the Mayor of Virginia Beach has had his feelings hurt when we first published this article we stated he was convicted of a felony. In fact, the Mayor was convicted of a misdemeanor.  This error was corrected within 48 hours of the mistake and the correction is stated above.

We extend our deepest most sincere apology for confusing the two crimes. We would also like to clarify that we do not condone any criminal act nor should they be swept under the carpet. This was reported by other news sources HERE.