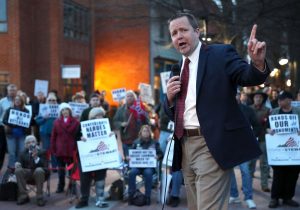 On Tuesday, June 13th, 2017, Virginians will head to the polls to select their party nominees for Governor. I will be voting for Corey Stewart.

Virginia needs a new direction to face the challenges of a changing economy. The governor is critical to creating a strong business climate that attracts jobs and gives the economy every opportunity to flourish.

Stewart is the only one with executive experience. As Chairman of Prince William County, he passed the largest tax cut in the county’s history and led them to be the top county in the state for jobs.

We cannot keep doing the same things and expect to improve, let alone compete. Like President Trump, Stewart will take the bold steps needed, not just tinker around the edges.

At every level Government has created swamps. It is past the time to drain them. The other candidates are the swamp. Corey has the experience to make the difficult choices needed to move our commonwealth onto a path of fiscal solvency and prudent growth.

Mr. Stewart is the right person to work with our local and state governments, and to work with the Trump Administration, to help Virginia flourish again.

He understands that government’s role is not to pick winners and losers in business. Rather, it is government’s role to get out of the way of the free market and allow the private sector to prosper, creating new jobs and opportunity.

Join me and so many others in turning Virginia red with Corey Stewart as the next Governor.

About the Author: Reid Greenmun

Reid Greenmun is a Business Analyst living in Virginia Beach. He is an involved civic activist currently serving on the Board of his local TEA Party. Reid specializes in political policy as legislative issues relating to the governance transportation and New Urbanism. He has opposed wasteful development project for decades. He invested over 17 years opposing and defeating a billion dollar light rail redevelopment effort in his city. Reid is active in local, regional, state and federal politics. He is a member of his church’s leadership team, serving in many roles to include teaching and yes, even singing in the choir. Reid was a longtime member of the Boy Scouts and a volunteer serving in a local ministry to help the homeless. Mr. Greenmun served in the Navy and supported technical efforts for the US Coast Guard, Special Operations Forces, Naval Shipyards, active duty shipboard combat systems, and several software solutions used by the Navy Reserve. Reid has served as a Chairman of his local Libertarian Party and is currently an active member of his local Republican Party. Mr. Greenmun served as a Delegate for Donald Trump in the Virginia state convention held in Harrisonburg.