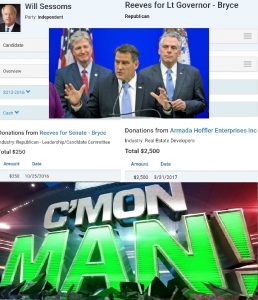 A cacophony of Bryce Reeves supporters have rushed to assure Virginia Beach Republicans how the Senator would have voted on an unpopular bill to study light rail. While hindsight and simulated votes are 20/20, I have previously penned a fact-check on which statewide candidates ACTUALLY supported it.

So, why is it that as recently as last October, Senator Reeves DONATED to Will Sessoms for Mayor? Furthermore, Reeves  campaign has taken thousands from pro-light rail developers like Armada Hoffler! How much of that money was made off the Virginia Beach taxpayers with PPP (Private Public Partnerships).

Worst part about this tragic misstep is the amount he donated. Why even bother? Will Sessoms probably has $250 in his Couch cushions!