Everyone who knows me is aware of how much I value loyalty in friendship and in politics.  Yet, I who preach it failed to practice it in an action I took a couple of months ago.

Let me explain, I have known Jill Vogel for several years. I considered Jill a friend and I was behind her campaign for Lt Governor, although I did not officially endorse her. Jill has been facing an issue that as yet remains unresolved but, at the outset, I sent her a text saying that I did not believe and would never believe that, she personally would have anything to do with what was alleged.

My opinion never changed, but I went ahead and endorsed another candidate. I should not have done that.  I had no reason to do it other than being convinced that the allegations were irrefutable.  Now, today I want to put it right and I humbly apologize to Jill for giving the impression that I ever doubted her. 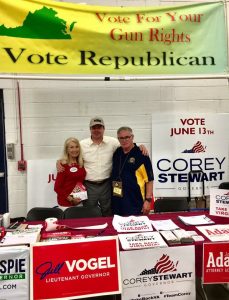 I am unequivocally endorsing Jill Vogel for Lt. Governor whom I believe to be an ethical and honorable woman and someone who will fill the role of Lt. Governor with integrity, dignity and the desire to do the right thing for Virginia.  I campaigned for her and Corey Stewart today at the Dulles Gun Show and I am encouraging all Virginia Women to consider voting for her on Tuesday, June 13, 2017.

I have spent many days praying about this and my heart tells me it is the right thing to do.  I have not discussed it with anyone or sought anyone’s opinion.  Jill does not know I am doing this. I know some people will not be happy with me but I have to do what I feel is the right and honorable thing to do.  I have to be able to lay my head on the pillow at night and feel at peace.  I am, therefore, formally withdrawing my endorsement of Bryce Reeves.

I am voting for Jill Vogel for Lt Governor and I formally give my endorsement and full support to Jill Vogel and ask others to do the same.

About the Author: Alice Butler-Short