Skip to content
Home/Localities/Town Center TIF: Time for this Teenager to Grow Up
Previous Next

Town Center TIF: Time for this Teenager to Grow Up

The Central Business District TIF encompassing Town Center celebrates its 18th birthday this November.  It’s time to cut the umbilical cord of public subsidy and allow this overly-dependent teenager to grow up and support itself.

Despite hubris from City Hall, the TIF has failed to meet the promise to “pay for itself” with incremental real estate taxes from new, private development.  Financial statements show the City’s debt payments for garages and other infrastructure have exceeded the real estate taxes collected within the TIF each year since 2011.  This pattern will continue for the current as well as next fiscal year.  This is not how officials said it would work.

In City Page of January 28, 2009, then City Manager Jim Spore said, “the bonds to pay for this public investment are paid back over 20 years, funded by incremental real estate taxes generated by the project itself.”

In the TIF report of July 1, 2008, the City’s Director of Finance, Patricia Phillips stated, “TIF…is a method whereby localities dedicate incremental real property taxes by a specific project…to fund public improvements…Once the obligations of the TIF are fulfilled, the TIF is dissolved…”

The City’s Town Center Phase IV presentation of November 18, 2008, stated that the “Project pays for itself with revenues generated by the project – Real estate tax incremental revenues.”

But these incremental real estate tax revenues have fallen short.  In 2009, Council voted to take a portion of hotel taxes generated in Town Center to help finance Phase IV development bonds.  Phase IV never happened and the bonds were never issued, but these hotel taxes continue to flow into the TIF fund each year and are used to help make payments on old debt.

Ms. Phillips has done a commendable job refinancing debt with lower interest rates, and tax collections have overall outperformed projections since 2011.  But these positive variances have been inadequate to close the debt service gap.  Since 2011, a cumulative $4.2 million in debt payments have been met using Hotel Taxes, Reserves and “Miscellaneous Revenue”, not a financially sustainable plan.

The City argues that other business-related taxes generated by Town Center have more than compensated the General Fund.  But the City has consistently overlooked the negative effects of displacement, unfair competition and the fact that many businesses operating elsewhere in the City simply relocated to Town Center.  Further, all Town Center hotel taxes and nearly a third of the restaurant taxes are earmarked for tourism subsidies or go back into the TIF fund, not the General Fund.

City services provided to Town Center have skyrocketed alongside the skyscrapers.   Public utilities and public safety are paid for by the General Fund, to which Town Center contributes little. Taxpayers throughout the City shoulder this burden.

In another example, the recent real estate tax increase of 1.25 cents to fund all-day kindergarten applies to TIF properties, but less than 18% of these new revenues will go to schools.  The vast majority will be used to pay TIF debt.

Council’s commitment to another $21 million in debt for Phases V and VI appears to have established a pattern of perpetual subsidy.  The City dissolved the Lynnhaven Mall TIF in 2012 after just 14 years, declaring it an “unqualified success.”  When will the TIF at Town Center be dissolved?

The failure of Light Rail dealt a devastating blow to Town Center’s hopes for economic revival.  Subsequently, Armada Hoffler has now proposed a $100 million “deal” to build a new city hall adjacent to Town Center but still within the TIF, in a swap for City-owned land. Two parking garages are also mentioned…cause for grave concern for taxpayers.

The City has outmaneuvered itself.  If the TIF has been successful, it is no longer needed and should be dissolved. If the TIF is a loser, it should still be dissolved after paying off existing obligations.  The City should keep its promise to return the new real estate tax revenues to the General Fund. 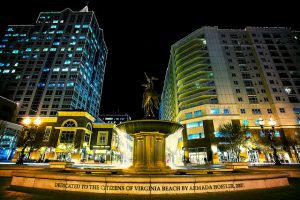 No more debt, no more deals.  It’s time to terminate the TIF.  It’s time for this teenager to grow up and carry its own weight.