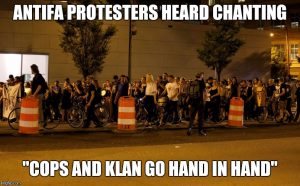 A rose is a rose is a rose, by any other name. So shouldn’t a congregation of violent extremist idiots follow the same nomenclatural standards?

Last night in Richmond, barely 24 hours since a young woman and 2 brave state troopers tragically lost their lives, the phony charlatan gang of thugs known as ‘ANTIFA’ managed to pry 100 or so adult children away from their dorms for the purpose of terrorizing Richmond residents. Several assaulted area residents attempting to film their misguided display, and Monument Avenue residents were awakened to sounds of frenzied protesters vandalizing their property. Well, free speech – right? Yes, free speech; as in the journalist who was hospitalized for daring to film these brats.

This is an example of Antifa at work in Seatle, Washington. 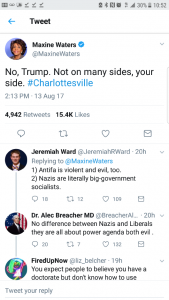 Let’s call a spade a spade. I have personally witnessed the outright hypocrisy and violence from a group that calls themselves ‘Antifascists’ yet can’t get enough of silencing free speech and throwing bricks at people who don’t agree with them. Last night was an atrociously stupid display that couldn’t have come at a worse time.

This nation needs to heal. Bat-wielding thugs with masks, be they left or right wing, are probably not part of that healing process. The ones who actually change history are the nonviolent voices with their eyes on the prize. Gandhi and Martin Luther King have laid down the blueprint, yet some people seem to feel Goebles or Farrakhan offer a better model.

I call on the leadership not only at VCU but also in the City of Richmond to get off their hands and lead. No more veiled rhetoric or divisive double speak. How many Richmonders are living in poverty and we are arguing about Statues? Meanwhile, the white-nationalists are planning another “muh statues!” rally on September 16th. Mayor Stoney, the ball is in your court.