Is Hampton Roads TPO Bowing to Altar of PC? 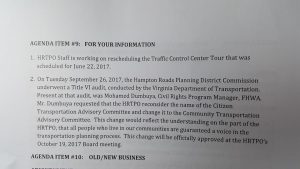 Many Believe This is Another Example of PC Gone Wild

They also play a big part in approving federal money for regional projects such as the 264 Interchange and the Hampton Roads Bridge Tunnel.

During the recent quarterly meeting, some members of the committee were taken aback by the recommendation, as it was suggested to be a frivolous exercise in semantics by several attendees. However, with citizenship being a prerequisite to vote, it is not one to serve on the HRTPO committees.

However, many believe this is another example of PC gone wild, where our sovereignty is being eroded and perhaps our own government is ignoring the downsides of illegal immigration. One MPO employee actually declared she agreed with the recommendation and considered herself to be a “Citizen of the World.”

The advisory committee is in itself an offshoot of Title VI provisions aimed at involving the community in often politically charged projects that can involve eminent domain and environmental justice. The CTAC findings and recommendations are then sent back to board members, who include many local elected officials such as Virginia Beach Mayor Will Sessoms and Vice Mayor Louis Jones.

While non-citizens do pay taxes and drive our highways, to what extent do we as a society take action to accommodate them? Is American citizenship becoming a dirty word or a type of exclusive dog whistle? I would love to hear comments to this, as this story is evolving.