They are Rounding up the Raw Milk Drinkers 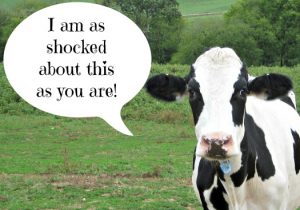 So there it is the bottom line. Fluid milk sales are a multi-billion dollar trade. And they don’t want to share.

In the 1950’s it was common to purchase raw milk in VA. Over the course of time, industrialization forced smaller dairies out of the countryside. By the 70’s and 80’s people were missing that good old real milk. They sought it out and by default, since by then outright purchase was illegal, they found that it was not illegal to drink milk from your own cow. So it began, cow shares and herd shares sprang up in Virginia.

People chose raw milk for a myriad of reasons, taste, healthfulness, and ability to know the farmer who milks the cow are three major ones.

To understand the gravity of the situation, one must understand the power-hungry milk processors at the state level and the national level. They have well-paid lobbyists. The lowly dairy farmer him or herself does not make a fortune on milking cows. They might make a dollar a gallon- ( it is measured by weight, not volume).

On the other hand, the processors, who manufacture the creams, yogurts, butter, flavored milk, cheeses and more are making a fortune. Sometimes the margins are so slim on items they constantly must create new items to appeal to the masses.

Over the course of time, competing industries have interfered with profit margins. Enter protein and power beverages, designer teas, Gatorade, coconut milk, almond milk, designer juices and more. They all command attention at the grocery store and the dairy industry is losing the customer base it once had.

So there it is the bottom line. Fluid milk sales are a multi-billion dollar trade. And they don’t want to share. So in come the RINO republicans and industry advocates, Barry Knight and Mark Obenshain to kill off a small thriving community of cow-sharing- organic-raw-milk drinkers and farmers.

Do yourself a lovely favor this day, consider acquiring some raw cream for your coffee. And do some online research. In one search use the word CAFO and in another use the words cow share. See which model you would like to use for your personal food consumption. And ask yourself why Knight and Obenshain want to destroy small farm operations.

About the Author: Bernadette Barber