HOW TO TELL THE TRUTH WHILE LYING 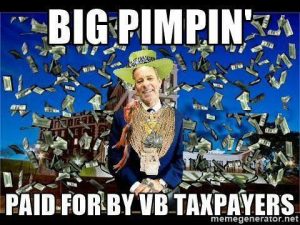 BUT LET US NOT BE DISTRACTED. The problem lies not with Thompson, but with our City officials.

On Monday, Bruce Thompson hastily addressed a letter to City Council with this opening statement:

“While I am currently not an owner or investor in the proposed Virginia Beach Pier project, there is a possibility that at some future date I may have a minority stake in both ownership and development of this iconic project.”

Hysterical laughter aside, Thompson obviously felt compelled to respond to Monday’s news flash that “Pier Place, LLC”, the company SUPPOSEDLY representing Thompson and the “consortium” of families pushing for the pier development deal, DID NOT EVEN EXIST before last Friday, February 23rd. And now that the company DOES EXIST, it belongs to an uninvolved party.

While it may be technically true that Mr. Thompson is not “currently” an owner or investor (when has Mr. Thompson ever used his own money?), his statement belies certain facts. Official letters from former Acting City Manager Doug Smith, as well as Troutman Sanders Attorney R. J. Nutter, II, who is representing the “families,” CLEARLY show that Thompson has been a part of the “consortium” or “joint venture” as an “investor” in this deal for over two years.

BUT LET US NOT BE DISTRACTED. The problem lies not with Thompson, but with our City officials, elected and appointed, who have made and continue to make SERIOUS ERRORS in this project and the bid process. 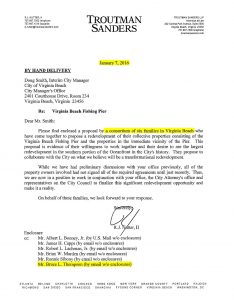 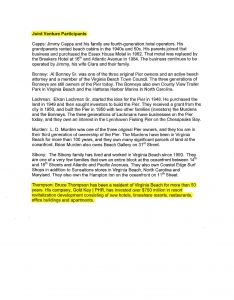 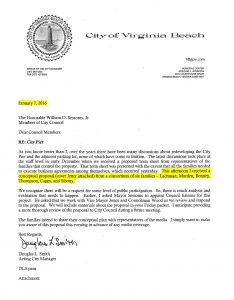