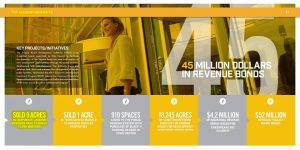 UNETHICAL? ILLEGAL? INCOMPETENT? It must be time to abolish the VBDA.

This page from the VBDA’s 2015 Annual Report says it all. This is their list of “TOP ACCOMPLISHMENTS” for 2015. Now, look at the first grey box in the bottom left corner. It says, “SOLD 9 ACRES in Corporate Landing Business Park to Green Flash Brewing”…really? Is this the truth or is it a LIE? Land records indicate that VBDA Commissioner Jerry Miller owns the land and the building. So of the promised “$20 million” in capital investment from Green Flash Brewery…How much exactly did Green Flash invest? A $275,000 Economic Development Investment Program grant was awarded to Green Flash by the VBDA based on the promised $20 million. I have FOIA’d a copy of that check.

The City Assessor’s website indicates the land and building which Jerry Miller owns are currently valued at $8.5 million. We know Green Flash installed some very unique, heavy brewery equipment…but $20 million worth? We know that all the equipment is being sold through a broker…but NOT the building nor the land. Yes, it is being sold as a “turnkey” operation, but whoever buys it will pay rent to Jerry Miller.

Besides the many legal and ethical questions the Green Flash fiasco raises with the Development Authority, the next question that comes to mind is, “Are these Development Authority Commissioners even COMPETENT?” Exactly HOW do they go about determining WHO should get a big fat cash award? Do they perform an in-depth financial analysis on these companies BEFORE throwing our tax dollars at them? A quick read of the current news articles regarding Green Flash Brewery and its expansion to the east coast in Virginia Beach show a very, very POOR, DEBT-LADEN business model that was DOOMED to fail. In fact, Rona Marsh has posted today that their San Diego operation has gone BELLY-UP.

Not to get too far off track, but please read the rest of the items in the boxes at the bottom of that page to understand how this unelected, unaccountable, 11-member Development Authority has far too much POWER over your MONEY. City Council GIVES the VBDA land, purchased with your tax dollars. The VBDA issues DEBT for which YOU are responsible to pay through higher taxes. And you have NO SAY. But City Council APPOINTS THEM. Tell City Council to FIX THIS MESS.
UNETHICAL? ILLEGAL? INCOMPETENT? It must be time to abolish the VBDA.