Every year the City Manager, staff and certain council members frame the discussion surrounding the new proposed budget, by focusing on a hodge-podge of nickel-dime tax increases that must be approved in order to avoid financial disaster, drastic cuts in essential city services and, downgrading of our sacrosanct AAA bond rating. Meanwhile, the very STRUCTURE of the budget, the thing which causes the bleeding of our tax dollars to corporate welfare and special good ol’ boy interests, remains intact, year after year and is not challenged. The STRUCTURE of the City budget is outdated, unresponsive to emerging needs and is pock-marked with the cronyism of the Jim Spore era.

Former City Manager Jim Spore came to town in 1991 with a bag of tricks up his sleeve and a budget scalpel in hand and began his work to transform the City of Virginia Beach from the Redneck Riviera to an Upscale, World Class Resort (sorry, I have to laugh here). The City Budget was his Agent. During the 1990’s Spore created the first tourism subsidies TGIF and TAP, dedicating tax revenues, some new some old, AWAY from the General Fund and into these subsidies. Spore also created the Open Space Fund and the Agriculture Reserve Program (ARP) Fund. These things may sound nice, but when you see that Bruce Thompson was a recipient of millions of $ of Open Space Funds for his Cavalier Hotel and that Councilwoman Barbary Henley and Delegate Barry Knight have personally benefitted from the ARP funds, you might think again. In the early 2000’s Spore created the Major Projects Fund, almost DOUBLING the revenues that poured into tourism subsidies. In 2012, he COMBINED the TGIF and Major Projects into the current TIP fund. See Spore’s strategy? Divide, conquer, create a new tax, fee or fund and then re-join or CO-MINGLE to hide what’s in them.

Perhaps Spore’s most sinister work was the creation of the three TIF (Tax-Increment Financing) Districts in the mid-late 1990’s: Sandbridge, Lynnhaven Mall and the Central Business District (Town Center). The three TIFs have had WILDLY varying outcomes, perhaps because none of them truly fit statutory requirements that TIFs are created to combat “blight”. The Lynnhaven Mall TIF was dissolved in 2012, but the other two remain with no end in sight. Every year, Sandbridge declares a multi-million dollar surplus ($8 million this year) that is returned to the General Fund, while the real estate taxes collected in the TIF at Town Center are INSUFFICIENT to meet the debt payments. Why such volatility between the two TIFs? You should be scratching your head and wondering why?

The Executive Summary of every new budget provides a Dedication of Local Revenue Chart. This is the blueprint for Spore’s Frankenstein. This is Spore’s legacy now carried out by Dave Hansen (I must admit however, I give Dave Hansen a gold star for even DARING to suggest taking money from the Agriculture Reserve Program to address drainage issues this year). This picture represents much of what is wrong with the STRUCTURE of the City Budget. Dedicated revenue streams into these pots of cash are producing HUGE, SACRED RESERVES or SAVINGS FOR THE CRONIES, even as YOU, the taxpayer, cry out for tax relief, flooding relief, attention to long, unaddressed infrastructure problems in your own backyard and the OVERWHELMING DEBT and UNFUNDED PENSION LIABILITIES which threaten OUR future as well as that of our children and grandchildren.

Time to do a MAJOR RENOVATION on the STRUCTURE of the City Budget and treat the cause, not just the symptoms, of continual tax and fee increases. Time to put everything on the table and start over. 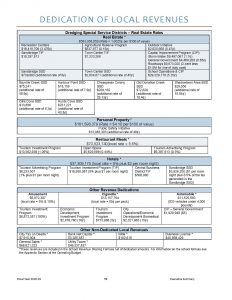