Corey Stewart is our Nigel Farage 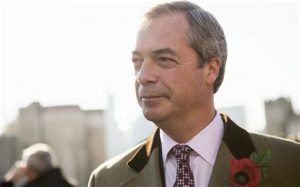 This has earned them the hatred of those who seek to maintain the status quo and grow centralized government.

Nigel Farage fights against the tyranny of the European Union, England’s tax dollars wasted in the third world, multicultural suicide putting Britain on the path to Islamification and a police state that prosecutes free speech. Farage is a once in a generation politician for the UK. However, in recent days, I’ve come to realize we have our own Nigel Farage here in Virginia. His name is Corey Stewart. The similarities between the two men are undeniable.

They both talk of working men and women who are rightfully angry at their elected politicians and their government. The dreams of the common man and what they wereraised to believe are being sold out and pushed aside in the name of paradoxical trade deals and dogmatic political correctness.

Their empathy for the middle class has earned them the hatred of those who seek to maintain the status quo and grow centralized government.Both have been accused of running “campaigns of fear” because they dare criticize the open borders agenda of the Left and some in their own parties. Farage responded to his critics referring to them as “Europhile Tories” and calling them “snobby.”

Farage went so far during a 2015 UK general election rally to say, “Tony Blair can go to Hell” for his willingness to cede sovereignty to the EU. Stewart had no problem calling Republicans who voted for the disastrous Medicaid expansion “flaccid” and “weak” for caving to the Left. While those in the Establishment who called for party unity actively tried to sabotage his campaign, Stewart said they should get “a##hurt cream” and respect the choice of the people.

They have both led the charge against foreign problems invading their homelands. Farage has been one of the most active and vocal opponents of Islamic fundamentalism and unvetted third world immigration into the country, while both Conservative and Labour governments allowed immigration numbers to increase. This  led to the nation’s capital London becoming one of the most dangerous cities in the western world.

Stewart faces a similar fight to prevent Prince William County from being overrun, like much of Northern Virginia, with the violent El Salvadoran MS13 gangs. His actions as Chairman of  the Prince William Board of Supervisors against illegal immigrants has led to Prince William County remaining one of the safest counties in the state. Farage’s early warnings that  immigration would lead  to violence and crime and Stewart’s actions as Chairman to keep Prince William County safe from MS-13 gangs resulted in both being smeared as “fear mongers” and “bigoted”. Proving that many of their critics care more about being popular at country club wine tastings than admitting that not all cultures are equal and can’t assimilate in the civilized Western World.

They also share a common love and belief in preserving history for future generations. Whether it is the British empire or the Confederacy, neither defends the politics, but the very men whose statues today are under threat of being put in the same government warehouse as the Ark of the Covenant in “Raiders of the Lost Ark“. They believe in the respect for valor and honor and for this both men are hated and scorned by those on the Left.

The very patriotism both men defend  often has nothing to do with ideology or government. It has to do with love of homeland. An alien concept to the multicultural Left. In spite of  their popularity with the working class and minorities who also want to raise their families in safe neighborhoods, the media is determined to paint them as “racists.”

They believe in a strong civic nationalism. They want their respective countries to be based in law, individual freedom, education, and economic mobility, under one flag, speaking a common language, and all living under the same legal standard, not balkanized as the global elites at the U.N. or Euro Commision want the Western world to become.

The one final thing these two figures share is they are often underestimated by the establishment of both parties. Farage for many years was portrayed as an ineffective “Little Englander.”

Despite leading UKIP to victory in European Parliament elections where Labour and Conservative seats were seen as safe. It was during the Brexit campaign, the BBC, Remain campaign, and even those Conservative party politicians who supported Brexit attacked him.

The Remain Campaign lead by a thin, but comfortable margin. However, on referendum night, the media and even the three major parties couldn’t deny his large part in swaying working-class voters to choose leave over remain. In celebration, he rose a pint declaring it Britain’s Independence Day.

The same arrogant underestimation is going on right now with Corey Stewart. He won four times in a county that hasn’t voted Republican for decades. He has twice outperformed against well funded opponents. He may appear behind in the polls now but Stewart is ahead of where Ed Gillespie was in 2014. Gillespie  lost that election by less than 20,000 votes.