Skip to content
Home/Localities/RK gets it.  Vote RK!
Previous Next 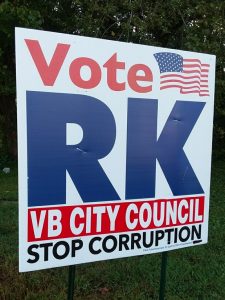 We have a CORRUPTION PROBLEM.  Until we deal with the heart of the matter, NOTHING ELSE IS GONNA CHANGE.

Virginia Beach has a public corruption problem.  It starts at the top and it filters down through every department and every appointed board.  Why in the world do you think the FBI held a symposium on “Public Corruption” Thursday night at the central library?  We don’t have a storm-water problem or an unfunded-pension liability problem or a  jobs problem or an IT problem.

We have a CORRUPTION PROBLEM.  Until we deal with the heart of the matter, NOTHING ELSE IS GONNA CHANGE.

We will continue to have Councilmen appointing their own mothers to powerful boards, brothers occupying the top tiers of local law enforcement and the same good ole’ boys getting the multi-million dollar handouts of YOUR money, that is then deposited into THEIR BANK.

Richard “RK” Kowalewitch is running…again…to STOP THE CORRUPTION in our City Council.  He has the gift of a big mouth that won’t shut up.  We need that.  He’s deeply knowledgeable about conflict of interest laws and is more than happy to call out the offenders.  He’s also owned and operated a business at the oceanfront for decades.

Some people say he’s a splitter, that he’s “unelectable”.  If you think coming in 2nd against a powerful, heavily-financed incumbent in the Mayor’s race, both in 2012 and again in 2016 makes you a splitter, what do you call the other “losers” who came in 3rd and 4th?  If you think RK’s unelectable, well, John Moss was also unelectable at one time.

Moss ran for Mayor in 2008 in a 4-way and came in 3rd with less than 16% of the vote.  Moss ran again for an at-large seat in 2010 and lost again, coming in 3rd with just 15% of the vote.  But opportunity knocked in 2011 when an at-large seat opened up and a special election was held.  Moss seized the opportunity that was his, fought like hell and won with 37% of the vote in a 4-way.  Not a landslide, not even a majority, but a VICTORY!  Just 16,779 voters put Moss on City Council.  Likewise, I believe the Beach race this year belongs to RK.

John Uhrin has been embroiled in personal controversy and public corruption investigations.  How much money has his family made off of the Cavalier Hotel project?  Nygaard doesn’t seem to know whether he lives in the Beach District or not.  Coker makes nice facebook videos.  But WHO fought front and center against Light Rail? Who has routinely spoken out at City Council hearings for YEARS?  Who was the ONLY Beach candidate to SHOW UP at the WNIS radio station studios for a one-hour talk show hosted by Mike Impervento and Kerry Dougherty just last month?  I’m dumbfounded that only one candidate took advantage of that golden opportunity for free advertising. 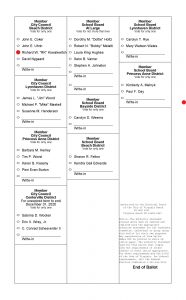