Skip to content
Home/National, State/Time for a reality check, Corey Stewart
Previous Next 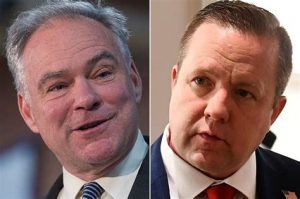 This is probably the hardest thing I’m ever going to write, but the conceited (though well-intentioned) attitude of my fellow Stewart supporters, has compelled me to have it published.

As of now, we are losing and going to lose big a month from now to Tim Kaine. It is not because either E.W. Jackson or Nick Frietas would have been better campaigners of raised more money. It is not because of constant staff turnover and embarrassing comments from Rick Shaftan.

It’s because our candidate Corey Stewart has become repetitive without the spark and zeal, he won a Senate primary on. His debate performances while not awful are not the home runs that many of my friends make them out to be. Watching a debate in person as they did, is much different from watching it as the masses do on television. Most of my friends, Republican and Democrat know Tim Kaine to be the typical rent a politician. Corey’s evasion of questions and spluttering doesn’t help his image or set him apart though as a true alternative to undecided voters.

At the recent Hampton university townhall, he was asked a question about how to deal with sexual assault in the military. His golden opportunity to call for harsher punishments was destroyed when he decided to verge into talking about Tim Kaine’s left-wing protestor son getting arrested. This is not to say that his attacks aren’t valid. Tim Kaine’s son did get bailed out, while many others spent the night in jail. The attack has not stuck for months though. The Stewart campaign has become nothing more, than just an Anti-Kaine campaign. Some attacks work, some attacks don’t. As much as I hate to say it, like Michael Crabtree last Sunday in Cleveland, Virginia isn’t catching the ball.

Have we not learned that simply being against someone isn’t a winning formula,i.e. Hillary Clinton’s campaign against President Trump? Instead of talking about issues that were the winning formula in the primaries like trade, illegal immigration, taxes, crime, and issues that matter to everyday people, we’re talking about things nobody outside of political circles cares about. As much as I love smacking around Tim Kaine’s record and failure to parent one of his kids. We have to be about something, not just against someone. But even this recent pitbull mode has not been consistent.

Just a month ago he was flipping on immigration. He called for one to two million new legal immigrants to be granted work visas in the United States annually. Something he quickly dropped as a talking point. It’s as if he’s having an identity crisis before our eyes. Yet it’s the failure of so many of my fellow Stewart supporters, to see this and redirect him to a policy focused campaign, that he ran during the primaries. Instead, they have gone full Pollyanna. They think only being down 10 points, instead of 19 is a sign he’s going to upset Kaine. This faulty logic is based off the 2014 U.S. Senate race between Ed Gillespie and Mark Warner, that had Gillespie behind the even further, who nearly upset Warner. If you question this though, they act like you’re not a hardcore supporter, even if you’ve been one from the start.

Don’t get me wrong, there are many things I love about Corey combative style and his supporters, which I am one. However, a boxer never wins a fight brawling. They strategize and focus, where and when the next punch should go. The bravado and viciousness we were promised though, has been inconsistent. Kind of like Robert Deniro’s career. And like Deniro, his attacks are falling flat. Even if they are right.

I didn’t just write this article though to criticize Stewart. I also wrote it tell him what I would do to close the gap and win this election. I would go to every poor White, Black, and Hispanic community possible between now and election day. I would talk to them about the dangers of the current immigration system, that endangers national security and job prospects for poor/minority Americans. Push school choice for low-income Americans. Demand a second round of tax reform that cuts corporate rates for small and startup businesses. Share how health savings accounts are more cost and care efficient than Obamacare and Medicaid. Call for an end to foreign aid, until Congress can honor to fully fund social security. Talk about repealing HUD regulations that prevent law-abiding residents of public housing from owning a firearm.

Finish it off talking about the need to pass stricter anti-human trafficking/sex crimes laws, including the ultimate penalty for those who violate the honor of women and children.

That will rob the Democrats of any chance to credibly attack you. It will even force the RNC to take further notice. Focus on the issues Corey Stewart, not innuendo or pollyanna advisors. Do this and you may reach the promise-land. At this point, with most polls that still have you behind in the double digits.

To paraphrase our favorite President, What do you have to lose, by not trying?