Skip to content
Home/National/An Uncivil War, Not Of This World
Previous Next

An Uncivil War, Not Of This World 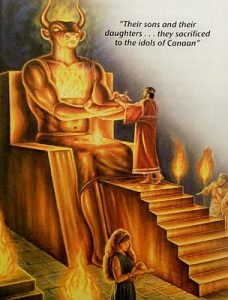 In the recent media debacle, we witnessed over the last three weeks about newly confirmed Justice Brett Kavanaugh. My belief is we are in a conflict beyond one of flesh and blood. While we may not have seen ghosts and goblins, make no mistake, the enemy and his legions that flow through the air influence and use all those who offer themselves as vessels. Vessels to spread lies. Vessels to intimidate. Vessels to promote immorality as normal. Vessels to promote evil as good.

Dr. Ford, her lawyers, the senators, and media were all vessels to destroy a good man and further divide men and women. The divide amongst men and women is a whole article in itself. Right now though, some of us on the right are celebrating when we need to realize this fight is not over. I’m not talking about the midterms either. We are now in October. This is the month when one of Satan’s most powerful henchmen is at his most active in sowing seeds of destruction.

His name is Baal, a Phoenician idol.

For some, I may be jumping a major shark. But those who do believe in a spirit world, recognize that all idols do have demonic power and seasons when they are at their most powerful. Just as there are Bible and Torah influenced by our God, one of Christians and Jews. There are also texts influenced and informed by the devil and his legions.

While I hate hyperbole, it’s pretty clear that these demonic powers are manifesting in the political left. While I know many liberals, whose views are more based on good intentions vs practical realities. The left, whom I differentiate from those simply Center-Left, have embraced a loud, vulgar, and increasingly militant dark ideology, dare I write satanic in nature and belief. I call them the left because they are illiberal. I call them the left because they follow that path. That path is one of envy (socialism). That path is one of wrath (screaming, charging the capitol, and assaulting opponents). This left-handed path that so many young and sheepish people are following and at the very least manipulated into giving credence is beyond political. It is spiritual.

We’re not even halfway through October, but we’ve seen plenty. While the seeds may have been planted months ago, this is the month for which the devil always harvests. He has plenty of high profile vessels to do it through, including Hillary Clinton’s excusing incivility unless her Party takes power. Just as a demon would, she is encouraging the left-wing of this country to hold the American people hostage with fear and intimidation. Do not let this grip you with a feeling of doom. Let this awake you to the reality of who is our foe.

It is up to you and within you, as a Christian or Jew to fight this evil that threatens our way of life. It doesn’t mean to physically combat the left outside of self-defense. The best way to combat both the left and evil in its many forms is to speak the truth. The truth, especially of God is more powerful than the hate, envy, and bloodlust of the left. One of the greatest gifts God inspired man with is to create the voting booth. God’s will for a more lawful and moral order, can only be fulfilled when you choose to act upon it.

So let us speak the truth, with our ballots this November.