Skip to content
Home/National/Anarchy is not Conservatism
Previous Next

Anarchy is not Conservatism 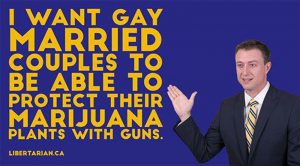 Thelema “Do what thou wilt” political philosophy

I have always had a respect for certain aspects of Libertarianism and most definitely the concept of self-government. However, in recent years, I feel as if the Republican Party, the Party of family values and moral order has ceded authority to those who wish to undermine these institutions.

If you go on many “Conservative” sites these days, you see an increasing number who seem to embrace the normalization of recreational drug abuse, hardcore pornography, public sexuality, and sneer at any law being based in morality. They argue morality is relative. That it is in the eye of the beholder, not government. It’s as if they fail to comprehend, that we the people are the government because we elect those who represent us.

This nihilistic and know nothing attitude towards believing in traditional values, yet not promoting them in power is nonsensical. In reality, these people who hide behind the moniker of a conservative, are really nothing more than anarchist Libertarians. I recognize because I’m a realist, that we will never repeal gay marriage, which could have been nipped in the bud, had President Bush pushed for civil unions in exchange for a federal marriage amendment. That would have preserved traditional marriage on a national level.

I also recognize that the realities of drug abuse and prostitution will always be realities, til God smight them in the final hour. My argument is this though, do we concede to evil and immorality because the fight appears futile? I say no, not just based on biblical principle but also in the concept that ” To do nothing in the face of evil, is to accept it”.

The “know nothing” attitude this brand of Libertarians have towards confronting and containing the evils of this world is akin to the idea that the alligator will eat me last. This Thelema “Do what thou wilt” political philosophy has been tried not just in Europe, but most notably in San Francisco. A city that just 60 years ago was working class men and women, now has become the epitome of Babylon’s ass. Outside of gun rights, the ultimate anarchist Libertarian fantasy is in play there. Open drug use, prostitution, used needles, violent vagrants, and the smell of human feces that seems to be the perfect scent for a city that has become a human sewer.

While not all Libertarians want or even believe, this will be the reality of a fully realized Libertarian vision in action. However, there are some, including running for office who have no problem with this vision being realized. Even in the Republican Party. They promote it as individual liberty when it is in reality self-destruction. 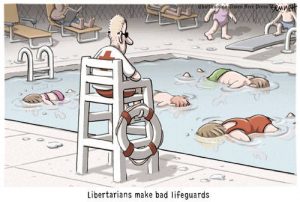 These charlatans are often the ones, that can afford to counter the ill effects of these societal breakdowns with isolated communities and private facilities should the harsh realities of drug abuse and potential prostitution hit their child. All the while, poor and minority Americans are at the mercy of the streets and emergency rooms. Effectively not being any better off, than they were before the normalization of vice. Because in reality, Libertarianism, especially of the Ayn Rand variety has Darwin like attitudes to those who struggle economically and socially. In their view, the weak are irrelevant and the sooner they are gone, the better.

It’s the flip side of socialism which seeks to make these people beholden to government assistance. Either way, both are extreme and go against the Christian virtues of empathy, law, and civil order. Don’t mistake this commentary as one approving of the conduct in our execution of the drug war and preventing human trafficking at home and abroad. Both of which I believe have been halfheartedly fought.

Solutions I will present in an upcoming article. It is one that calls for the revival of our Party, conservative movement, and family-minded individuals to be unashamed and yes legislate our values, not chicken out with the convenient line “But I wouldn’t want to impose it on others”. That is the line of a deceiver, not a believer in what made conservatism the philosophy of those seeking a stable social, cultural, and economic environment for themselves and their children.

I welcome your comments and hate mail.