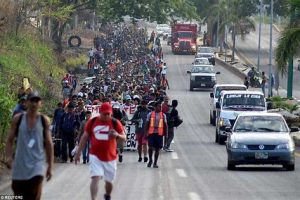 For nearly two years of this administration, Congress has failed to pass a Pro-American worker immigration reform bill known as the RAISE Act or approve the 30 billion dollars needed for a border wall at the U.S./Mexican border.

Either one of these legislative/funding measures being passed would have delivered a large blow financially and psychologically to the cheap labor and human trafficking industry reliant, on both a porous southern border and weak visa system. Because of this failure, despite DOJ and DHS ramping up enforcement, migrant caravans have continued. Officers in detention centers are overwhelmed.
Earlier this year, Trump has been forced to use a harsh Obama era policy of family separation, to discourage more migrants from coming in the most recent caravan. The media jumped in and spun it as usual, into a heartless campaign against migrants. Still, Congress has failed to provide support and pass, either wall funding or the RAISE act. This President clearly wants to secure our border and reform our immigration system, to benefit the citizenry, aspiring Americans respecting immigration law, and disincentivize these caravans from heading north to enter illegally or exploit immigration loopholes. Congress has shown no evidence of even caring about this, apart from some token legislation from GOP House Leader Kevin McCarthy.
If the caravan crisis that occurred earlier this year (that we’re still dealing with), isn’t enough to get Congress to support this president before the midterms? Then nothing will. That’s why the President, as Commander in Chief of the armed forces, may have to do something unprecedented and extreme, to confront a new caravan spotted last week, originating in Honduras. This caravan has an estimated 300,000 migrants. Footage has shown, this is no spontaneous exodus of Central Americans. There are vehicles, large amounts of water, and other supplies being transported on the backs of trucks and wagons. Clearly, this is a well-planned invasion via migration. 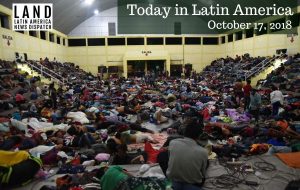 Both Honduras and Guatemala, have refused to interdict and break it up, even as it crosses their borders illegally. Getting our Mexican neighbors to do anything about it before this caravan enters their country, is unrealistic. This is despite Trump’s threats to cut all foreign aid to these nations. President Trump, it is time to send the United States Military, specifical assets from our special operations community, to interdict, indefinitely detain caravan leaders, and destroy the supplies of the caravan. It is also time to consider occupying and creating a buffer zone within Mexican territory if they continue to refuse to help bar the caravan before it enters their country.
This, apart from Congress acting, is your only option to send a clear message that violating the sovereignty of our borders, will be met with force. I by no means am advocating for shooting or killing those, not engaged in combat with American troops. By showing our willingness though, to use troops to destroy supplies and send the Coyotes to a black site. It will send a strong message to foreign nations, human traffickers, and NGO’s run by Hungarian Billionaires, that the United States will no longer beg for you to be a good steward of your nation’s borders.
If the poor defense of your borders, threatens ours, we will act decisively. This though is not the only thing, that must be done. Jeff Sessions must order a complete investigation and pursue charges wherever possible, against NGO’s that are organizing and providing support for these caravans. Though I’ve seen no explicit evidence of it being organized by a Soros NGO. We know he’s been revealed as a puppetmaster pulling the strings behind caravans of Syrian refugees in recent years. His subversive activities, lead to Hungarian Prime Minister Viktor Orban’s government to crack down on him. President Trump and his DOJ must do the same.
Until Congress gets its act together and supports the President’s border/immigration policy, these are the only game-changing options we have available, to end this caravan and deter future ones. Those who are worried about this potentially causing bad press and international outrage, obviously care more about poll numbers than policing our homeland. If anything, it will affirm the image of a strong and decisive President, with whom the American people’s confidence is growing daily.
By Tom Watson|2018-10-24T19:15:09-04:00October 24th, 2018|