Skip to content
Home/National/Mr. President , we deserve better than the USMCA
Previous Next

Mr. President , we deserve better than the USMCA 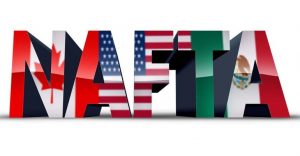 In recent months, a new and revised NAFTA deal has been touted by the White House as a win for the American economy and worker. The United States Mexico Canada agreement (USMCA), is indeed an improvement in many ways to America’s benefit. It will force Mexico, a country known for dangerous working and wage standards to upgrade. Making life better and illegal immigration less attractive to potential/current economic border crossers. It also disincentivizes automobile industry outsourcing and moving plants overseas, with new rules of origin requirements for auto parts.

While these things will definitely help rebuild and rebalance the automobile industry to blue collar America. There are several major issues, in an otherwise strong agreement that is overly long. Namely that all three nations will agree to water/fishery rules, modeled after the 1982 UN Law of the sea. This provision does not make us a signatory to a UN treaty, it will allow both Canada and Mexico to potentially gang up on us, as we have seen happen to Britain in the EU.

One of Britains historic and most prosperous findings meccas Essex has been destroyed by EU rules allowing foreign fishermen to enter and cut into the resources of working fishermen. As the great-grandson of a fisherman, the last thing that struggling industry needs now is two foreign powers crushing our fishermen in the gulf and both coasts. The second is that it does not rid us of the hideous trade dispute system, infamously known as Chapter 11. A secretive and unaccountable entity that “settles” trade disputes. The third is that regulates submarine exercises in the others water. Pardon me for sounding imperialist, but the United States should never sign anything it can’t promise when it comes to its military.

Even with a friendly nation, the right to exercise the sea on our terms is necessary for security and preparedness. Fourth, this one harkens back to 2016. We were promised that trade blocs, would no longer be the norm for the United States. That bilateralism, not multilateralism was the future in order to customize to our interests with each nation. If this agreement is ratified, we will be in between two pieces of stale bread. A left-wing Prime Minister to the north and incoming left-wing President to the south. The latter of whom views America more radically than mainstream news will admit.

President Trump isn’t the first politician or even nationalist in history, to attempt to reign in bad trade bloc, before realizing it was too late. British Prime Minister Margaret Thatcher was an original supporter of Britain’s entry into the European Economic Community (EEC), the forerunner to the European Union. Even in her support of establishing a trade bloc that would remove barriers for British goods, she realized that economic cooperation was just the forerunner to bigger and nefarious agendas. A federal Europe, something that is now a reality. Throughout her 11 year reign as Prime Minister, she fought for better deals and against further intrusion on the British economy by unelected EU officials in Brussels. It was in her third premiership and seeing the negative results of entering the EU’s Exchange rate mechanism (ERM), that she went from being a vocally Moderate Eurosceptic to a full-fledged Anti-European hellraiser.

This move further to the right against the EU would cause a division with elected members of her party that ousted her in early 1990 winter leadership coup. Since her ouster, she voiced support for leaving the EU. Something that despite being approved by the British republic via referendum, has been stalled by Conservative in name only government. Like Thatcher, I fear President Trump is only kicking the can down the road with the expectation that both partners in the NAFTA trade bloc, will not continue to collaborate concoct trade disputes against the United States.

It’s time to do what was promised in 2016. End NAFTA and negotiate free trade deals with Canada and Mexico. Ones that include the positives I pointed out earlier, but ones that do not continue or risk expanding the grey area concerning our sovereignty as a nation.