17 Years Of Not Fully Funding Pensions Is Enough

In 17 years how did Virginia Beach go from the 2001 Surplus of $63 million in Pension Retirement accounts for the City Police/Fire/Workers and Schools Teachers/Admin to more than $ 1.2 Billion dollars Pension/Retiree benefits shortfall?

Lines 9 and 15 of numbers. see marked up chart Redlines. 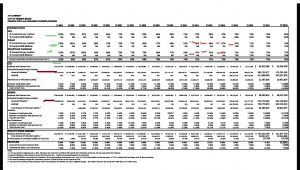 If Virginia Beach Taxpayers pay less than 100 percent of their Tax bills yearly there are consequences. The City will come after the taxes owed.

But nothing appears to have happened beyond the liabilities ballooning bigger and bigger while the City of Virginia Beach has quietly been making smaller Pension payments – as little as 65% in 2012 for Teachers.  Back in 2001, the City made 105% payments and the Pensions had surplus funds.

It’s not rocket science that if you underpay there’s a shortage so the Pensions unfunded liabilities grew and now the City Police/Fire/Workers has about $370,000,000 shortage (that millions).

So from $63 million surpluses in 2001 to $1 Billion 243 million shortage where did the Taxes paid go? Obviously, the Pensions are not being funded as much as they were in 2001 and the City is going to take 26 years to pay back the $1.2 Billion liability created in 17 years. Why does it look like the City is overspending and has bad fiscal Management? 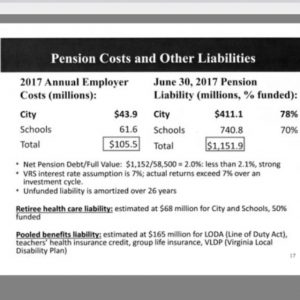