The Drug War’s Self Imposed Waterloo 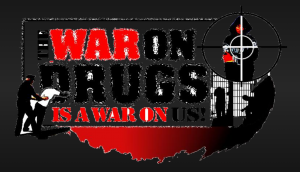 The war on drugs, one of the last fronts in America’s criminal and cultural war. One that has divided both Liberals and Conservatives, over whether to continue fighting it or give into legalization. This struggle to demean and defeat the trafficking and public health crisis of drug addiction has by and large been a relative failure.

I write this, not as someone who joins in with the Libertarian or Left-Wingers, that wish a pot brownie cafe on every corner and a bong in every garage. It’s because, like so many “wars” that America has declared, including the “War on Terror”. We as a country have yet to see a government with the desire to win it.

For decades, the southern border has wide open. NAFTA allowed Mexican truckers carrying various narcotics into the country, growing the power of the once low-level Mexican cartels, as the Medellin Cartel fell. This was a significant moment in the drug war because it came at a time right after the crack epidemic died down in the early 1990s. So significant, that it made it into the 2015 film “Sicario”. The scene where Josh Brolin’s character, lectures Emily Blunt about when there was one main cartel. Mexico now has several large cartels. This selling out of the country though, didn’t come without those on the front lines who warned us. Even if it was largely ignored by the media and public.

One of those men was DEA Agent Michael Levine, one of the most highly regarded undercover agents in the agency. In the latter days of the Reagan administration and early NAFTA discussions, he led a successful sting operation against a Mexican General and former Presidents son, implicating them in a drug-protection racket. The operation was eventually shut down by Edwin Meese. A man who was no stranger to corrupt side deals and putting political agendas ahead of his duties, most notably the Wedtech scandal. Levine would reveal these revelations in an unfortunately forgotten, but DEA corroborated biography “The Big White Lie”. The implication of drug trafficking by high-level officials in the Mexican government could have killed any public or presidential support.

As the Bush administration continued pushing the NAFTA deal, which President Clinton would eventually sign. The drug war entered a second phase. This time with the full complicity of the United States government. One wouldn’t think so, with three strike laws and tough talk from Presidents Clinton and Bush.

The bumper sticker politics, slogans and increasing incarceration rates for drug offenders, while effective and something I support didn’t fully address the need to hit traffickers at the heart of their operations and rebuild the mental health system. This deficit in controlling the flow of drugs, both foreign and domestic, wasn’t unintentional. In a recent article by the New American, it was revealed that our government has accepted a level of drug trafficking, across our borders. This betrayal of our country has allowed an opioid epidemic to boil over and is robbing the lives of so many young men and women.

To call this a “War on drugs”, is a misuse of the word “war”.  A real path to victory does not just come from laws based on baseball. It doesn’t just come from walls, which I support either. It will only come, when we like the Swedes did just two decades ago, go after addiction and trafficking. It’s a zero-tolerance system where traffickers are punished with lengthy sentences and non-violent addicts can forgo jail, if they will commit to an extended period of rehab/mental health treatment.

This has over time, has been shown to have a preventative effect on drug abuse and trafficking. It’s the one Nordic policy, you shouldn’t expect the current socialist Democrat party, to advocate anytime soon, because they want a continually dumbed down populace. It’s also one you won’t hear too many calls for, in an increasingly cowardly Republican Party.

If it doesn’t help the cheap labor marketers, then protecting the people from dangerous psychotropic substances isn’t on their list of priorities. Until it is, we will never change course and achieve a more stable situation, concerning both drug trafficking and the addiction that fuels it.