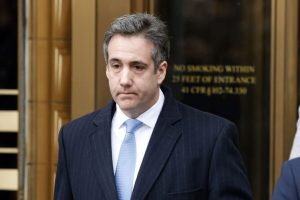 To borrow a phrase from my New York friends, Michael Cohen ain’t a stand-up guy.

The only thing Nixonian about the Trump administration is the fact that convicted liars are now being used to attack his political career. Exhibit A, his now-disbarred ex-lawyer Michael Cohen. A man just weeks away from going to jail for lying to Congress among other charges, including bank fraud.

Why would a man then, with all this baggage be considered a valid witness, worth testifying before the same people he’s going to jail for lying too? Nothing more than politics to smear the president while he’s on a trip, that could officially end the Korean war and lead to the denuclearization of the Korean peninsula.

This isn’t the first time the Left has gone all in, with convicted liars. One particular case comes to mind about Richard Nixon and suspected Soviet NKVD agent Alger Hiss. During the days of McCarthyism, Richard Nixon served as the famous Senator’s right-hand man, in the fight against communist infiltration of the U.S. government. One of the men he took down, was then-State Department official Hiss. While Hiss was never convicted of espionage, he would be convicted of perjury in relation to the charge. After a handful of years in jail and all but escaping being convicted for espionage, Hiss would re-emerge to attack Nixon. This time though, with the help of the media, proving they’ve never been simply about the facts.

After Nixon lost the 1962 California Gubernatorial race, ABC aired a Howard K.Smith segment called “The political obituary of Richard M. Nixon”. Guess who got a staring spot, to smear and rub salt in the wound?!!!! A convicted perjurer and all but convicted traitor.

He smeared Nixon and the HUAC (House of Un-American Committee), as bullies and politically motivated. Watching the interview, which is hard to find. You would think that what a nice and tormented man, Mr.Hiss is. That McCarthy and Nixon were two inadequate and self-hating squares attacking a Left-Wing boy scout. Because it was a somewhat saner time, Smith lost his show after a great public backlash, from both Anti-communist Republicans and Democrats. Decades later after the end of the Cold War, Hiss would officially be exposed as an agent of the Soviet Union, by Democratic Senator Daniel Patrick Moynihan of New York.

Now we have another rodent of a different variety. A man whose testimony, could be written at a CNN skit night pajama party. His claims that the President is a racist, a liar, a cheat, a man who cheats on his wife, and someone who laughs with glee (like we all would), at the government sending him a refund check, probably bigger than what he probably would have gotten, without tax code loopholes. Yet even after all these claims, he continued working for and socializing with the man. How convenient that he grew a conscience, right after the Feds raided his office like he was Scarface.

At Wednesday’s hearing though, he’s being treated like a man on redemption road. A bad guy, going good. A real-life Fletcher Reed. Except unlike the Jim Carrey character, there is no happy ending and reuniting with family. It’s just one more pit stop on the way to prison. Doing the will of the Mueller cabal, hoping it will earn him the crumbs, befitting stool pigeons. To borrow a phrase from my New York friends, Michael Cohen ain’t a stand-up guy.