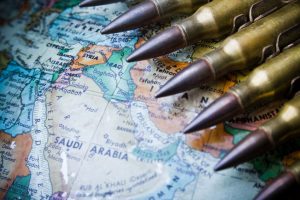 However, this victory is nothing to just spike a football over.

On the week of the 16th anniversary of the invasion of Iraq, a military victory has once again been achieved in Mesopotamia. The physical caliphate of ISIS has officially been destroyed, in its last stronghold Baghouz, Syria. Those left alive, are now surrendering or have fled in the confusion. This victory is no doubt an achievement and deserves the same reverence of previous wars, in which most American and British forces have led the fight against the great generational evils, as they did in World War 2.

In the coming days, the President needs to do two things. He must address the nation and world, laying out that we achieved victory, that those who aspire to reorganize a caliphate, will be shown even less mercy if they try and reorganize the insurgency. An address to restore confidence in the United States ability to wage and win a war, in a Post-2003 invasion America, that’s suffering from undisclosed fatigue, similar to the Post-Vietnam syndrome, that wasn’t fully overcome until the Gulf War. The warning that we will be even less merciful, should a future insurgency emerge, will set a precedent that’s long been needed in the war on Islamic terror. A precedent that should have been set after our initial victory in Afghanistan.

The second thing we must do is begin an unannounced withdrawal all Non-Special Forces troops are needed to show to both Iraqi and Syrian allies, we are not there to nation build or occupy. We are there to kill the enemy, not guard the construction crew for a brand new McDonalds. While an announcement was made months ago, then just a week ago reversed on the numbers. We need to resist announcements of withdrawal, even if we are. Announcing withdrawals has been proven time and time again to be a disaster and gives the enemy a psychological victory, incentivizing them to wait it out. Certain special forces should remain, to advise or launch any special kill or capture missions (Similar to British SAS missions in Oman and Malaysia), but Iraq must step up in conventional warfare.

Hopefully, violent conflict may never come at all, in resolving the question of removing Syrian Chemical weapons. Until this happens though, it will remain a threat that must continue to be countered in diplomatic and economic channels. Supporting Islamists in North Africa and Mesopotamia, like the last administration did and should arguably be prosecuted for, is a case study in how to not attempt an overthrow of your adversaries. Thankfully with the current administration, they have rejected this self-defeating Machiavellianism. This brings us to the final, but not any less important question.

What to do about the Kurds? I for one, contrary to what may have looked like an attack on Machiavellianism, have no qualms about being one in the interests of my country. I believe that America should never put her men and women in harm’s way, just for ideology and pure adventures like the NeoCons or Trostkyite Liberals, though I do believe extreme cases call for gunboat diplomacy. In the case of the Kurds, we should restore a No-Fly Zone, but with European nations and the Arab states doing the work.

We could leverage our willingness to not bust their chops about NATO payments, if they will provide air cover to Kurds whose primary threat is another NATO member, Turkey. The main aggressor, who the United States has more than enough leverage with, to keep in line. We could threaten to withdraw our forces from Incirlik and even push to expel them from the organization, should they launch an attack on the Kurds. Turkey knows without its NATO status, it’s just one more move to becoming a further isolated and despised nation, without the military legitimacy that comes from NATO.

In summary, these are just a few of the issues in one conflict, of a generational war on Islamic terror. One that can still be won, but won’t until we accept the fact that this isn’t like any other war. It’s one, where the ideology of our enemy, must be stamped out and those working to push it, further outlawed and punished. The victories we will have overseas, will not matter if we cannot achieve victory at home. Victories overseas will also be meaningless if we do not state clearly the policy of the United States towards all hostile enemies is three-pronged. We kill you, leave, and celebrate. If need be? Repeat, until peace for the United States and her interests are secure.