Skip to content
Home/State/So What/Who Rules The RPV, The Party Plan or The Personalities of Power?
Previous Next

So What/Who Rules The RPV, The Party Plan or The Personalities of Power? 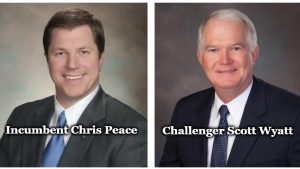 But wait, Just when we all thought it was all over!

On May 4 of this year, the 97th Legislative District committee organized and held a convention, to decide who the nominee would be, for their House seat. The decision to have the convention was decided earlier in January, and this began a race, between Incumbent Chris Peace, and challenger Scott Wyatt. Had either side had an issue with the method of nomination, an appeal could have been sought, as is the remedy for grievance, set forth in our plan.

Both camps participated in pre-filings, three mass meetings, certification of delegates, etc., and proceeded to go forward with the convention. When the deadline came, for the list of all the prefilled delegates, to be shared, the Peace campaign began to pause, when it may have become clear, that they were not assured of success.  The Hanover Representative to the LDC, armed with 62% of the weighted vote, next sent a call for a meeting to convene, an item of Business being “Reconsider the method of nomination. “  To be fair, Wyatt had once been the representative to the LDC, but sent a proxy, to the fateful nomination vote.  The Hanover chair later removed Wyatt, but then replaced him with, as described in a Times-Dispatch article, an avowed Peace supporter.

Regardless that there is no way, to undo what cannot be undone, with nominations to a convention, once the Delegates had been certified; a meeting was called that culminated in the Chair of the 97th,

Ruling actions and motions set to change the method of nominations, out of order, and abruptly adjourned the meeting.

Once again, had there been a grievance, the process of appeal should have been followed.

Instead, two members of the LDC, outside of the adjourned meeting, sought to “cancel “the Convention, scheduled 3 days later.    It is here that RPV Chair Jack Wilson weighed in, and, removed the  Convention, from the RPV website, without virtue of any action or appeal.

He further commented, calling the convention just a “Wyatt rally”, and along with Executive Director John Findlay, signaled, acted and used the position of their offices, to attempt to cancel the duly called Convention. The Convention went forward anyway, and Wyatt prevailed.

An appeal by the  Wyatt camp, of the “second nominations event” finally brought the details and the conflict, to the 1st District for consideration on May 20, where after sworn testimony from both camps, attended and witnessed by, both Director Finlay and General Council Chris Marston.   The 1st district found, that ;

1. The Convention was properly held and sustained the appeal of Wyatt

2. Wyatt is the nominee.

3. The call issued for the Firehouse canvas do June 1, is Null and Void.

But wait, Just when we all thought it was all over, Executive Director Findlay, at the meeting witnessing the proceedings, comments to be quoted in the Richmond Times-Dispatch story, the next morning, “As far as we’re concerned, the Firehouse Canvass is still on”.  Also of note, the event is still listed on the RPV website.

This begs the following question, who is “We”? And which set of rules are they operating under? Does total disregard, and outright defiance, of the decision of the 1st; come under some unknown section of the Party plan?

The called meeting of a majority, of the State Central Executive Committee, is to be convened to address the behavior, or lack of recognition, of the due process, that is set forth in our rules.

What’s really at stake is where does the authority of the Republican Party of Virginia derive from?

If these events and behavior, of the Chair, and Executive Director are allowed to go unchallenged, then there are no rules, by which the rank and file members can rely upon, to ensure a fair and even process.

There is no need for a hierarchy, of District leaders or State Central Committee, if their authority to makes decisions, and the process of appeal and consideration is ignored.

If the Chair, and Executive Director, will not refrain. from participating  in unethical activity, diminishing the dignity and credibility of the Party,

The very future of our Party is at stake.