Over 39 million in Taxes charged and collected all over Virginia Beach but are funneled to the RESORT Oceanfront TIP Fund (Tourism Investment Program).  Another $12 million of these Taxes are funneled to the RESORT Oceanfront TAP Fund (Tourism Advertising Program). Citizens want TAXES paid in their neighborhood to benefit their neighborhood where those Taxes are collected.

The 2018 TIP got $39,521,588…even more than was budgeted! Unspent funds are NOT returned to the VB General Fund (which benefits all Citizens) but are STASHED away in a SLUSH fund called a “Reserve for Contingency”. Other special funds, like the Sandbridge TIF, return MILLIONS of dollars of unspent funds every year to the VB General Fund.  WHY IS THE RESORT OCEANFRONT TIP FUND TREATED DIFFERENTLY?

Over 28% of the Restaurant Meals / Prepared Food tax (its 11.5 percent paid by RESIDENTS) goes into the TIP and TAP Funds… even though the RESORT Restaurants appear to generate less than 17% of all these Taxes. These percentages represent millions of dollars of overpayments to the RESORT OCEANFRONT TIP FUND, Tax money that should be going to our General Fund.

It feels like Resort Robbery because there’s a lack of funding for many needs in Virginia Beach Neighborhoods – Parks & Stormwater maintenance are scheduled out 15 years so the RESORT can build $68 million Sports Complex and RESORT amenities to boost the RESORT.

All of Virginia Beach pays the Taxes that are spent to benefit the RESORT.

Sign this Petition to tell VB Mayor & Councilmembers to keep Taxes collected for spending in neighborhoods where the Taxes are collected‼ Make your neighborhood/ Civic League area better by stopping the Resort Robbery!

All Virginia Beach Taxpayers pay the 11.5 cents meal tax that’s funneled to the TIP Fund 💰💰 the Resort spends the Tax dollars but wants REPAYMENT when Citizens use Taxes for the entire City⁉ When does this end? 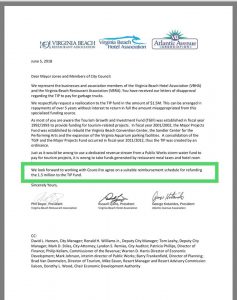